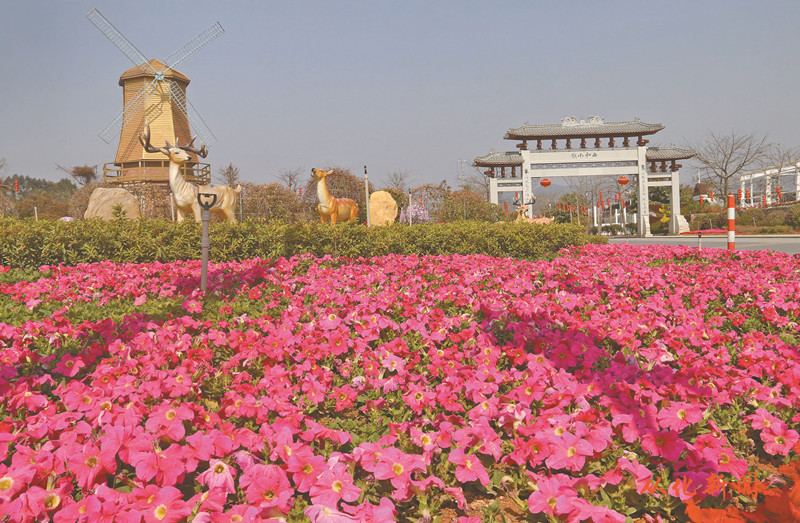 During the 13th Five-Year Plan (2016-20) period, Conghua district of Guangzhou, the capital city of South China’s Guangdong province, took up the opportunity presented by Guangzhou's being made a pilot city in national tourism reform to construct a tourism demonstration zone that leads in integrating tourism resources, optimizing spatial layout and pushing for supply-side structural reform of the all-for-one tourism industry.

Focusing on its positioning to be an urban ecosystem, an innovation distribution center, a cultural leisure belt and a high-quality living zone that had been determined in its 13th Five-Year Plan, the district carried out all-round, multi-angle and three-dimensional publicity and promotion that was based on the concerted efforts from the fields of culture, tourism and sports, in a bid to enhance the industry's scale and quality and elevate its brand influence.

A working team with leading cadres from the district CPC committee and government, as well as  members from 40 functional departments and towns (streets) was established to pool efforts in coordinating the work related to the all-for-one tourism demonstration zone construction and tackling problems in the process.

In addition to taking into account the existing resource, the all-for-one tourism also focuses on the revitalization of rural industries. By implementing land policies such as compound utilization of rural land and making full use of funds from various departments at different levels, the district leverages social capital to support the development of rural leisure tourism, rural characteristic industries and public tourism projects.

Up till now, the district has built 458 km of greenway, 60 km of national level trekking trails, a 12 km ancient courier road in Taiping Qiangang village in southern Conghua, and a 6-km of stream greenway. The ring road in the northern mountainous area has been connected as well. Tourist information centers have been established at multiple tourism spots. It has also built 139 tourism toilets in major scenic spots and along tourist routes.

Conghua is richly endowed by nature with 1.8 million mu (120,000 ha) of mountain forest, 60 km of national level trekking trails and an ancient courier road with a history of 4,000 years.

Natural resources such as mountains, waters, fields and forests, and cultural characteristics such as ancient villages, relics and courier roads, are combined to form an eco-leisure tourism model. Greenways and trekking trails are used to hold national level sports events such as mountain climbing, camping, trekking, and mountain marathons. Study tour and parent-child tour routes have been developed, as have wedding and honeymoon tour routes availing themselves of hot spring and flower base resources. New projects such as the Hong Kong Jockey Club Conghua racecourse, the ecological design conference, international summits, and lychee customization have been developed as well.

Green campaigns were launched in building an ecological tourism industry. Greenways now connecting the scenic spots and public service facilities have been standardized with the goal of building a low-carbon greenway of natural beauty and vitality.

Conghua has planned 20 characteristic towns which will form a dynamic network of Red Tourism and green tourism.

Focusing on building its tourism brands, the district introduced a series of international and national level sports events, some of which have Conghua as their permanent site . Other major events such as the Congdu international summit, the world ecological design conference, and the world robot competition are held to forge a high-end brand in the exhibition industry. National level mountain climbing events, camping events and speed equestrian competitions are held to forge an outdoor leisure sports brand.

Moreover, the district has already formed an effective supervision mechanism for tourism.

The district has won tourism-related demonstration city titles at both national and provincial levels. From 2011 to 2020, Conghua's comprehensive competitiveness of tourism has ranked first among 67 county-level administrative regions in the province for nine consecutive years.