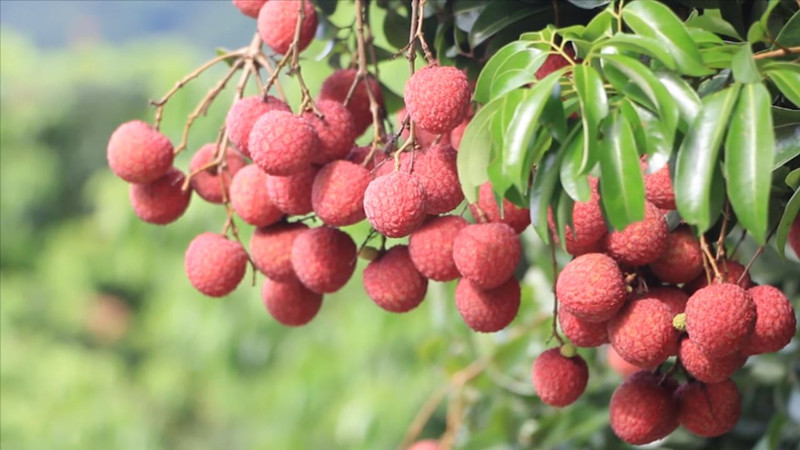 "Conghua's lychees, lychee honey and lychee wine are well-known, and today's taster really lived up to the reputation. When you have time, you must go to Conghua to taste the lychees and soak in the hot springs, and feel the charm of Conghua's environment."At the 2021 China Lychee Industry Conference, held on May 20 in Maoming city, South China’s Guangdong province, guests spoke highly of Conghua's lychee products.

Representatives from Conghua district, Guangzhou city, attended the event and demonstrated the achievements of Conghua's lychee industry. In recent years, the district has been working on its "lychee customization" project, and trying to turn Conghua lychees from a "small specialty" to a "big industry". 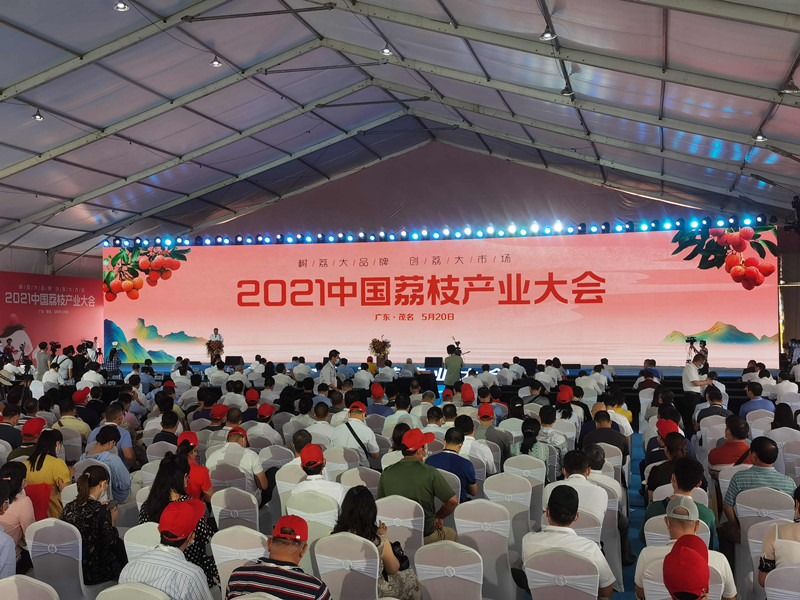 This year, the district has achieved great results in terms of "lychee customization". By the middle of May, more than 10,000 sets of customized lychee packages had been ordered, with sales volumes exceeding 20 million yuan ($ 3.13 million) for the first time.

A single lychee connects the upstream and downstream industries. It makes lychee wine, lychee honey, dried lychees and other products, driving rural leisure tourism, hot spring boutique tourism and other industries. This is a vivid portrayal of the scientific and technological modernization of agriculture and the integrated development of the primary, secondary and tertiary industries in the district, as well as a good way of enriching the people, helping the village industries prosper and promoting the overall revitalization of the countryside.

The lychee planting area in Conghua district stands at 300,000 mu (20,000 ha), and it contains high-quality lychee varieties such as Guiwei and Jingganghongnuo. The output volume of the lychees this year is expected to be 60,000 tons. As a major lychee production base, Conghua district has been working to develop its industrial integration, establishing a lychee industrialization consortium and creating an operation system using the formula of "leading enterprises + professional cooperatives + large growers + fruit farmers", as well as a whole industrial chain operation model defined as "production + processing + technology + marketing".

At the same time, the district is pushing for the development of its under-forest economy. The "one tree, three harvests" three-dimensional planting model has been explored, and the intercropping of Dendrobium, lychee fungi and other cash crops within the forest has been promoted, resulting in a value increase of more than 100,000 yuan per mu ($233,164 per ha). The lychee processing industrial chain has been extended, and new product lines such as lychee polyphenols, dry white lychee wine and lychee condiments have been launched. The lychee processing conversion rate of the district has reached 35 percent, and a number of technologies have been awarded science and technology progress awards both provincially and nationally. 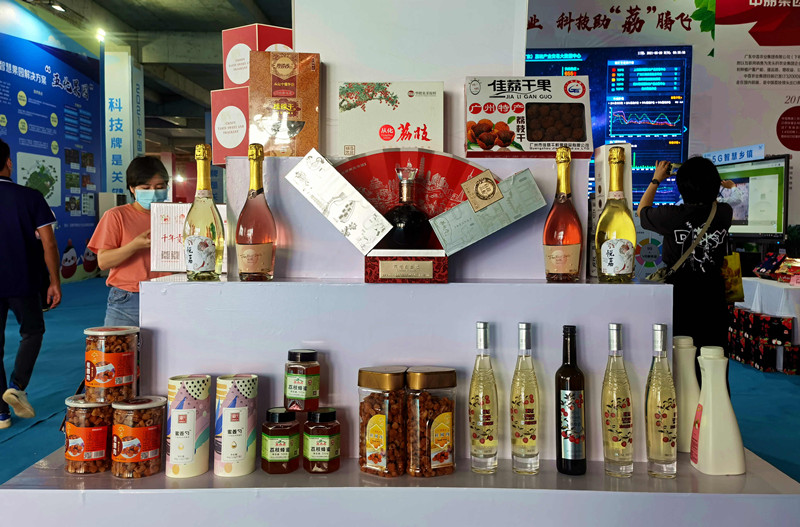 The district is vigorously developing its tertiary industry with lychees at its core. It is exploring the integrated development path of urban agriculture, and promoting the consumer market characterized by "lychee + hotel + scenic spot + specialty". With a focus on Conghua’s special resources such as agricultural parks, ancient villages and courier roads, family farms and professional cooperatives, multiple tourism routes are being cultivated, combining catering, accommodation, entertainment, and shopping, in order to drive consumption. "Red tourism" resources are also being cultivated. Six high-quality rural revitalization tourism routes have been launched, taking visitors to experience the highlights of 20 villages.

Marketing: Open up smooth passage 'from branch to tongue'

The market is the key to developing the lychee industry. Since 2018, the district has integrated its agricultural, cultural and tourism resources, innovated its sales models, launched "lychee customization" activities, and opened up its lychee sales channels. This year, the district has provided personalized services and launched 30,000 lychee tree customization packages, including online observation, field planting, and fruit picking, in order to upgrade its sales model from "multi-level distribution" to "orchard direct supply".

On April 1, a press conference was held to kick off the "Conghua Lychee customization campaign". On May 16, the Conghua Lychee charity customization campaign was officially launched. The customized "online + offline + charity” model helps Conghua Lychee to get early orders, even though the fruit matures late. On the other hand, the district has optimized its integrated marketing, expanded its "online + offline" marketing channels, built a "Conghua lychee cloud exhibition" platform online, and held a series of live broadcast activities. It has sped up Suning and JDL supply chain projects and built 15 field refrigerated warehouses, 50 lychee logistics collection points and five master collection points around the core production areas, as well as setting up village-level logistics packaging service points covering the 20 main lychee production villages, and creating a direct cold chain logistics system which can reach the whole country in 48 hours.

Scientific and technological innovation leads to industrial development. In the development of Conghua's lychee industry, the "leading experts + local experts" model is implemented. In cooperation with South China Agricultural University and the Guangdong Academy of Agricultural Sciences, the Conghua Lychee Industry Research Institute has been established. A team of more than 40 experts led by Professor Chen Houbin, chief scientist of the national lychee longan industry technology system, has been introduced to jointly tackle key problems in the lychee industry chain.

In addition, the district pushes for the integration of breeding and the promotion of new and high-quality lychee varieties. Relying on the "three districts, one park and one belt" layout of the provincial modern lychee agricultural industrial park, the district has planted a late maturing lychee orchard with an annual supply of more than 2 million ears, and a lychee germplasm garden with more than 300 varieties. By encouraging farmers to invest in trees, land transfer, and cooperative sharing, 5,000 mu (333.3 ha) of standard orchards in six large areas were planted, nearby farmers were motivated to breed quality lychee varieties covering 35,000 mu (2,333.3 ha), and the annual income of more than 10,000 farmers increased by 30,000 yuan ($4,678.3).

At the opening ceremony of the 2021 China Lychee Industry Conference, the national lychee longan industry technology system released ten of its new scientific research achievements, and "lychee high grafting technology" was on the list. Through this technology, 24 new lychee varieties such as Xianjinfeng and Jingganghongnuo were bred. Jingganghongnuo, originating in Conghua, is a new lychee variety cultivated by the South China Agricultural University, Conghua Hualong Fruit and Vegetable Preservation Co. Ltd and the district agricultural technology promotion center.

More efforts are being taken in the R&D of key preservation and processing technologies. Fresh lychee storage and transportation technology is at a leading level both at home and abroad, which effectively expands the sales radius of fresh lychee, rendering new advantages to the local products and promoting Conghua lychees to the world.

Literary master Yang Shuo's Lychee Honey has made Conghua lychees famous all over the country. Using its cultural accumulation, the district has built Conghua Lychee Culture Expo Park, a lychee big data center, a lychee cultural and creative base, and a 5G digital agriculture intelligent demonstration orchard, etc. to promote both lychee culture and the local brand.