The newly built Shimen Tangshan Tunnel on the South China Fast Road was opened to the public on Sept 16, and was completed nine months ahead of schedule.

The tunnel expansion project spans Tianhe and Baiyun districts in Guangzhou. It starts at the Xiyang Bridge north of the tunnel and ends at the north side of the Jinji No 1 Middle Bridge on the South China Fast Road, and has a total length of nearly 2 kilometers. It has eight lanes in each direction, and a designated speed of 80 km per hour.

The new tunnel is 670 meters long, and is the first super-span tunnel in China that is adjacent to the old double-arch tunnel. Its entrance and exit are 38 meters and 41 meters away from the old tunnel. 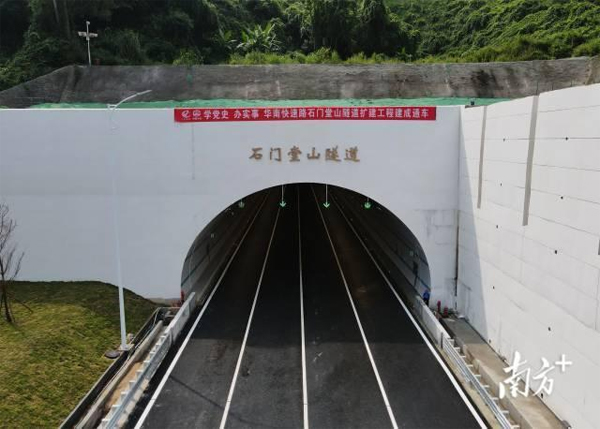 As the main north-south passage through the urban area of Guangzhou, the old Shimen Tangshan Tunnel only had four lanes near the tunnel's entrance, causing heavy traffic jams especially during holidays and festivals.

"In 2017, the days with traffic jams here reached 276 and there was always traffic congestion on holidays," said Wang Haijun, general manager of the municipal project department of Guangzhou Communications Investment Group.

The new tunnel's operation is expected to enhance Guangzhou's capacity for internal and external connectivity to further strengthen the city's position as a comprehensive transport hub, and facilitate the connectivity of the Guangdong-Hong Kong-Macao Greater Bay Area.