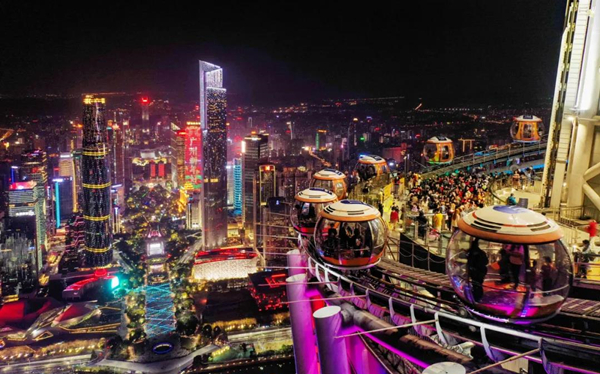 Tianhe district in Guangzhou saw its GDP reach 287.3 billion yuan ($44.3 billion) in the first half of the year, up 11.2 percent from the same period last year, said local authorities on July 29.

Thanks to its efforts in COVID-19 pandemic prevention and control, Tianhe’s economy has been on track for recovery, with all business sectors seeing robust growth.

Tianhe is the only one of Guangzhou’s districts that had a GDP exceeding 200 billion in the first half of the year. Its contribution to Guangzhou's economic output stood at over 21 percent since the fourth quarter in 2019.

As for the major sectors, between January and June, the output value of Tianhe's industrial companies above designated size grew 18.3 percent year-on-year to roughly 43.3 billion yuan, taking the top spot among Guangzhou’s districts.

Tianhe's manufacturing output rose by 15.6 percent on a yearly basis during the same period.

Meanwhile, total retail sales of consumer goods in the district expanded 24.1 percent year-on-year to over 100 billion yuan. Tianhe is the only urban district with retail sales exceeding 100 trillion yuan in the first half of the year.

The district’s high-end consumption has sped up its recovery. In the first half, the retail sales of cosmetics and jewelry saw annual growth of 44.1 percent and 72.1 percent respectively.

Tianhe also reported an annual growth of 66.8 percent in the lodging and catering sector, the highest among districts in the city.

In addition, Tianhe witnessed remarkable growth in the software and advanced service industries in the first half of this year.

For instance, the business revenue of the Internet, software and information technology sectors grew 20.6 percent year-on-year in the first half of the year. The business revenue of scientific research and technological services increased by 38.4 percent in the same period. And the convention and exhibition industry saw a notable growth of 115.7 percent over the last six months.

In Tianhe, newly established enterprises surged by 103.2 percent in the first half of 2021.

The district was home to 440,000 firms, accounting for 26.1 percent of the total number in Guangzhou, by the end of the first half of the year. A total of 78,000 firms were registered from January to June.

Moreover, the district's foreign investment in actual use soared 146 percent year-on-year to $1.15 billion in the first six months.