By Qiu Quanlin in Guangzhou chinadaily.com.cn Updated: May 17, 2021 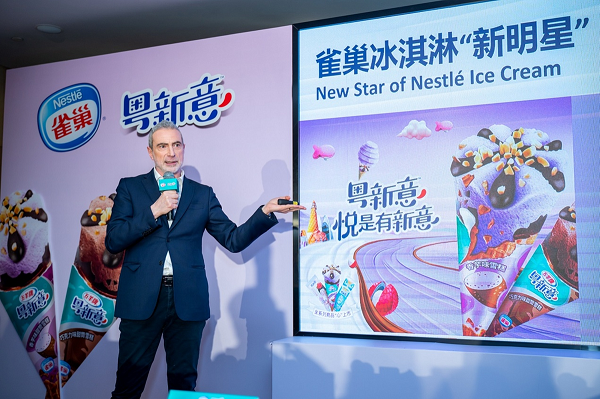 Global food and beverage giant Nestle would accelerate market expansion of its newly Cantonese-featured ice cream through continuous innovation in production, research and development and brand culture, according to a senior company executive.

"The Chinese market has strategic importance for Nestle, and Cantonese ice cream is a strategically important category for us to achieve long-term development in local market," said Angelo Giardini, senior vice-president of Nestle China and head of dairy, ice cream, industrial solution and water at Nestle.

Giardini made the remarks during the company's launch of its sub-brand Yuexinyi, an ice cream brand featuring Cantonese culture, in Guangzhou, the capital of Guangdong province, on Wednesday.

Yuexinyi, as a major fruit of the company's efforts in the ice cream field for years, absorbs the essence of traditional Cantonese culture and carries new meanings of the times from brand concept to flavor innovation, and packaging design, said Giardini.

"The brand is an intensive display of our innovation ability in localization," he said.

"Over the past 20 years, Nestle has been continuously increasing investment in the Cantonese ice cream category and the South China market, and will further strengthen R&D, marketing and production capacity and capability to create delicacies and experiences that break the boundaries of imagination for consumers," he said.

Yuexinyi's Xingshibang series originates from the historic art of the dancing lion, and the auspicious lion shape is novel, cute and vigorous. The upgraded FI-FI series presents the legend of princess history story, who loved to eat litchi.

The new series is produced by Nestle's ice cream factory in Guangzhou, which is equipped with an industry-leading automatic production line as well as coating and chocolate workshops.

"The factory in Guangzhou plays a key role in learning, developing and crafting the Cantonese taste for ice cream," said Giardini.